Vaudeville was America’s most important and popular entertainment from the 1890s to the First World War.  At its height, it included thousands of theaters, in communities large and small, from coast to coast.  Vaudeville enjoyed its most explosive period of growth between 1900 and 1912. The number of “big time” houses probably doubled after 1900 to roughly 100 by 1910, but it was the growth of the “small time” that really marked the industry’s progress.  One might conservatively estimate their increase from a handful in 1900 to perhaps 700 by the early 1920s.  New York was the capital of vaudeville with  48 theaters in 1911, but other cities were not far behind: Chicago had 41 and Philadelphia had  37.

“Big time” vaudeville was distinguished by the size and elegance of the theaters, their higher ticket prices, and the “celebrity” their performers.  “Big time” theaters also tended to be located in the centers of larger towns and cities or in middle-class neighborhoods.  “Small time” vaudeville tended to cater to audiences that were proportionately more working class than those attending “big time” theaters.

The vaudeville show itself was an organized presentation of various acts that ran for two to four hours.  Each act came on at a designated time and was announced on a placard placed at the side of the stage. Spectators could choose to sit through the whole show or take in only those acts or “turns” that interested them.  In order to keep their audience returning regularly, vaudeville managers changed their theater programs every week. Theater managers quickly discovered that by joining together and booking acts to play in several venues in consecutive weeks, often in different cities, they could secure 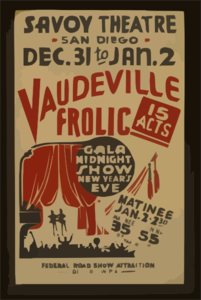 better quality performers by offering “continuous employment.”  The pooling of bookings originated, not surprisingly, in the Midwest, where the theaters were geographically dispersed, but once a few started pooling, everyone had to compete by offering continuous weeks of employment or “time.” This led to the creation of regional booking arrangements and later of chains and still later of cartels made up of chains. By 1910 the biggest booking organizations were offering performers up to 40 weeks of time.

Vaudeville pioneered modern mass entertainment.  The key features of vaudeville as a mass entertainment were:  a culture of celebrity, an easily understood product, relative affordability, self-promotional marketing,  networks of distribution or technologies designed to bring the entertainment close to the home, and a vision of its audience as seeking not just escape but stimulation.

The density of vaudeville houses, the huge number of performers, and the frequency with which shows changed, points to an important fact: the backbone of each theater’s audience was its own neighborhood. Rather than drawing spectators to a few large houses in city centers, vaudeville operated on a chain store principle and it brought the theater to the audience. Live popular entertainment was an immense, but also highly stratified and locally-sensitive industry; there was a hierarchy of venues, from the tent and fairground stages and rural theaters to the premier houses of New York, Chicago and San Francisco but they all relied on a core audience of repeat customers. It was also a highly inclusive industry serving men, women and children, old people and young, immigrants and natives. It was not, however, a theater for the poorest people, because they could not generally afford to come to a show every week. Vaudeville was instead the country’s first middle-brow entertainment, and it offered everything from slapstick comedy to singers of art songs, trained dogs to ballroom dancers, retired sports heroes to celebrated tragedians.

This website focuses on Vaudeville’s first-class houses: one-a-day and two-a-day theaters.  It has assembled data from archival collections, newspapers, and trade periodicals and each entry contains source information.  Reviews were chosen for inclusion when they offered some insight into what was being done on stage and, where possible, how audiences responded to the acts.   It is hoped that, in time, the website will expand to include information on the small time theaters, including the African American vaudeville houses.  Because reviews were chosen for inclusion when they contained certain types of information (the data entry form we use can be found in “submit a performance” page),  this is not a comprehensive record of all performances.  It does, however, contain information on tens of thousands of acts that can be searched by name, date, location or words used in reviews.  As such, despite its limitations, it makes available to serious researchers and interested readers a wealth of information on popular entertainment in the early twentieth century.  I hope you enjoy the site!