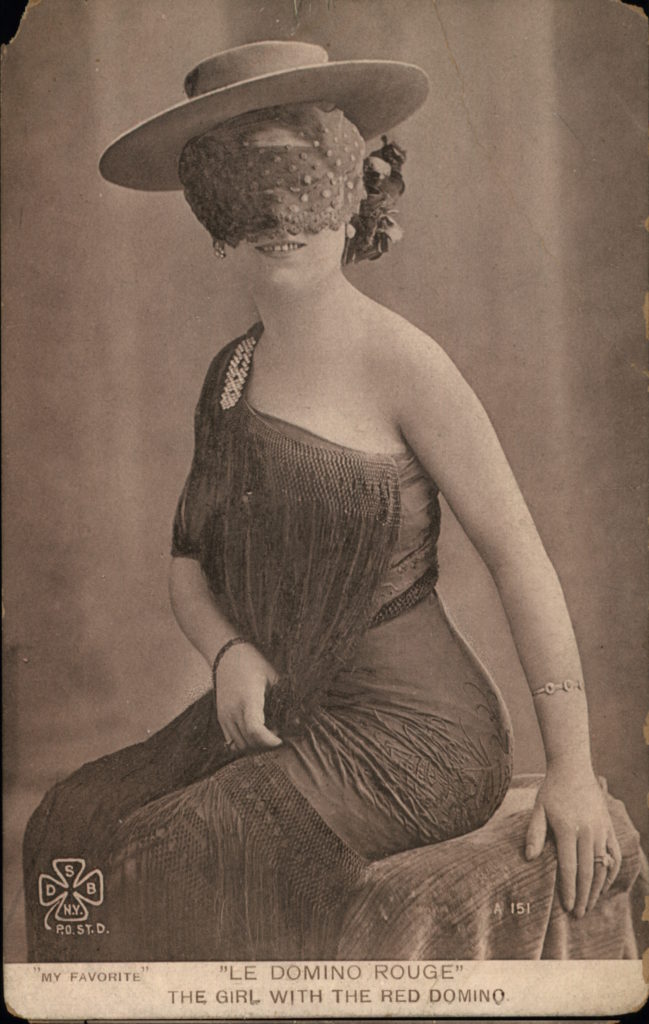 The toe dancer, La Belle Dazie, was born Daisy Peterkin in St. Louis, Missouri, in 1884. Her family moved when she was an infant to Detroit, Michigan, where she grew up. Her father, John Peterkin, was a confectioner. Her father owned several buildings, among them The Wonderland dime museum. When she was young, he later told reporters, “she made friends among the many wild animals in the menagerie, called all the freaks by their first name and was a chum of all the actresses that played in the theatre that was annexed to the museum. It was Loie Fuller who first fired her ambition to become a dancer.” She claimed to have begun dancing “for exercise” and to have made her first public performance at an Episcopal Church fundraiser. She studied dance in New York with Prof. Alviene, “the Famous Authority on Stage Dancing” and first appeared professionally as La Dazie at the Temple Theatre in Detroit and at the Cook Opera House in Rochester, New York in 1899. (New York Public Library, Billy Rose Theatre Collection, Robinson Locke Collection, Vol. 147, La Belle Dazie file, clippings: 15 May 1906; 21 November 1909, and July 1911; New York Clipper, 8 July 1899 and 10 February 1900)

In the eyes of reviewers, her dancing style owed much to Loie Fuller and in 1905 she copied Fuller’s “Mirror Dance” but with a “Moorish theme”, performing in “semi-Oriental costume”. (La Belle Dazie file, clippings: July 1911 and 21 August 1906).

In an interview Dazie explained her philosophy of dancing: “There should be soul in dancing, just as there should be soul in singing and acting. Without soul, dancing is purely mechanical. Haven’t you ever seen a good dancer and not felt her? That may not be the best way of putting it, but you understand what I mean, don’t you? A dancer should dance with the music, not to it. She must feel the music from her head to her feet. She must get the swing of it and let it carry her along. Her dancing must tell a story, otherwise the audience won’t know what she’s dancing about. I must confess that I hardly know what I am dancing about on opening night. My heart seems to be dancing more than my feet, and once or twice it nearly tripped me up â€¦ In vaudeville, the other girls always gave me plenty of room for my all-over-the-place style of dancing, and the orchestra leader was always willing to follow me.” She contrasted this to a ballet, where one had to “follow the stick”. (New York Evening World, 12 January 1907).

She danced in regional theatres in the US and appeared at Hopkins’ Theatre in Chicago in 1899 and as La Belle Dazie at the Casino in New York in 1901. She made her first appearance in London, England, at the Palace, in June 1901. She appears to have remained in Europe from 1901 to 1905. Later she claimed to have suffered an eye malady in St. Petersburg, while on tour, in 1905. According to the press, it was at the Folies Bergere in Paris, that she first appeared as Le Domino Rouge and danced masked, because she claimed to have found the glare of the footlights to be too painful. This performance provided her American breakthrough and she was contracted to perform at the Wistaria Groves Rooftop in New York. She wore the mask during her return voyage to America on the White Star Liner, Majestic, creating considerable curiosity concerning her identity. She pretended not to speak English and instead spoke gibberish; as she put it, â€œI made a noise like a Russian. That always frightened them [the press] away.” Gradually, she introduced some “broken English” during the 1905 tour, as though she was learning it. “Talk about acting a character part!” she later laughed. (National Police Gazette, 5 February 1901; The St. James Gazette, 3 June 1901, La Belle Dazie file, clippings: 15 March 1912; 1 May 1916 and 1 June 1915; New York Clipper, 7 December 1907)

The mask she wore as Le Domino Rouge was red and was claimed to be completely opaque. Her managers therefore insisted she was dancing sightless. (New York Evening World, 14 July 1907)

Dazie spent one year dancing as the masked Le Domino Rouge, never divulging her true identity. She wore the mask at all public appearances. The mask helped turn her into a vaudeville sensation and she broke mid-week attendance records both in Chicago and New York. Her managers, Louis Werba and Mark Leuscher boasted that she was bringing in $1,000 a week. She returned to Paris in September 1905 and danced successfully for two months at the Casino de Paris. In December 1905 her managers proposed removing her from vaudeville and touring her with her own company, but this appears not to have happened until 1909. (La Belle Dazie file, clipping, 1 May 1916; 25 November 1905; 15 December 1905).

The dancer was contracted by the Colonial in New York and returned to America late in November 1905. Following this she was booked by the Keith circuit for early 1906. During this first United States tour, she appeared at the International in Chicago in March 1906, Fisher’s Theatre in San Francisco, Considine’s in Oakland. She returned to New York in April to play at Hurtig & Seamon’s Theatre and then went to Hyde and Rehman’s in Brooklyn, ending her tour in mid-May 1906. By the end of the tour she was commanding $2,000 a week. (New York Telegraph, 26 November 1905; La Belle Dazie file, clippings: 14 March and 25 March 1906)

At Joe Weber’s Music Hall in New York, she finally unmasked on stage, revealing herself to be La Belle Dazie. (La Belle Dazie file, clipping: 14 May 1906)

Always a semi-high-brow entertainment, Dazie became a celebrity entertainer and was hired to perform before the “fashionable set” as the Park Casino in Newport, Rhode Island, in the summer of 1906. She later performed as a celebrity dancer at the Metropolitan Opera in New York. Her success was rated “spectacular and unprecedented as few toe dancers have ever established a vogue in America” (New York Telegraph, 16 July 1906)